This weekend was SQL Saturday Albany 2020. This was my third time attending the Albany event, my second time presenting, and my first virtual SQL Saturday. As always, Ed & his team did a terrific job with organizing it. Communication for both attendees and speakers was excellent, and as far as I can tell, everything ran very smoothly.

I presented Keys to a Healthy Relationship with SQL Server in the 3:30 PM session block. I’ve uploaded my slides to the SQL Saturday site. This is targeted primarily at application and database developers and I had a pretty good-sized turnout for the session. I promised folks answers to questions they asked in the session so let’s address those right now:

I’ll get back to my session later in this post. Stay tuned.

I volunteered to help out moderating a couple sessions, as well as getting one of the rooms up and running first thing in the morning. I picked up two jobs for the day - being a panelist/moderator for a session, and being the primary “organizer” for one of the rooms. Knowing that I’d be wearing multiple hats for the day, and not wanting to present as “Virtual Room Organizer #4” when my session came up, I set up two computers to work from all day.

On paper, there wasn’t much to this gig. I just had to make sure I was awake and online before everyone else so that I could get the room started for the day. I did this from my Mac so that I could leave the account logged in all day to make sure the room stayed open all day, and grant presenter/organizer/panelist access to the appropriate people. I was able to attend four of the six sessions in my room and I knew the speakers, so it was an opportunity for me to get to chat with them a bit as they settled in and got set up.

Online presentations can be tough for a speaker, as you can’t easily see when people have questions unless you have multiple monitors. Nor can you gauge body language of your audience, because while they can see you (if you have a camera running), you can’t see them. The moderator really helps out when you’re online here - they’re monitoring the chat and question panes in GoToMeeting and breaking in when there are questions that pop up which probably shouldn’t wait until the end of the session.

I moderated Thomas Grohser’s session and partway through it, the laptop I was working from BSoD’d. I think it’s a heat issue, it happened earlier this summer as well. And hey, I had my Mac on the other side of the desk up and running, so it wasn’t a huge deal. I picked up from there, and I don’t think anyone knew it happened. Thomas’s finished his session without incident. But this spooked me more than a little.

Two is One and One is None

Being a decent DBA, my “healthy” paranoia (thanks for that one, Deborah!) about backups started to kick in. Matt Slocum (blog | twitter) had ISP, internal network, and PC issues in the 12 hours leading up to his session. Technology was looking dicey in our neck of the woods (Matt lives about 10 minutes up the road from me).

Computer crashing while I’m moderating someone else’s session? Not great, but the world keeps spinning. If my laptop were to crash while presenting my session, it would be bad. I’ve got the backup, but if I have to fall back to that, I don’t have a second backup parachute. As lunch approached, this weighed on me more, so I pulled out my work laptop, hooked it up, and logged into the room from there as well.

After having a Pc issue during the first #sqlsatalbany session this morning, I now have a backup and a backup backup. It’s like NASA in here. #sqlselfie pic.twitter.com/1AlpIRjL1p

OK, But What About Your Session?

I think it went pretty well. Deborah Melkin (blog | twitter) and Andy Yun (blog | twitter) were in the virtual room for the sessions before mine, so I spent the whole afternoon hanging out there. This helped me relax before I was up, and Andy finished a few minutes early so we chatted for a bit while I got set up.

3:30 rolled around and I launched into my presentation. Five minutes into it, one of my worst fears was realized.

The PC I was presenting from BSoD’d. Again.

Less than four hours earlier, I was feeling a bit silly about my paranoia, setting up a third computer and being logged into the same meeting as Virtual Organizer #4, Andy Levy, and AndyBackup LevyBackup. Now, it was feeling like a pretty smart move.

In rapid succession, I:

And while that was going on, my audience was treated to this incredibly flattering webcam image 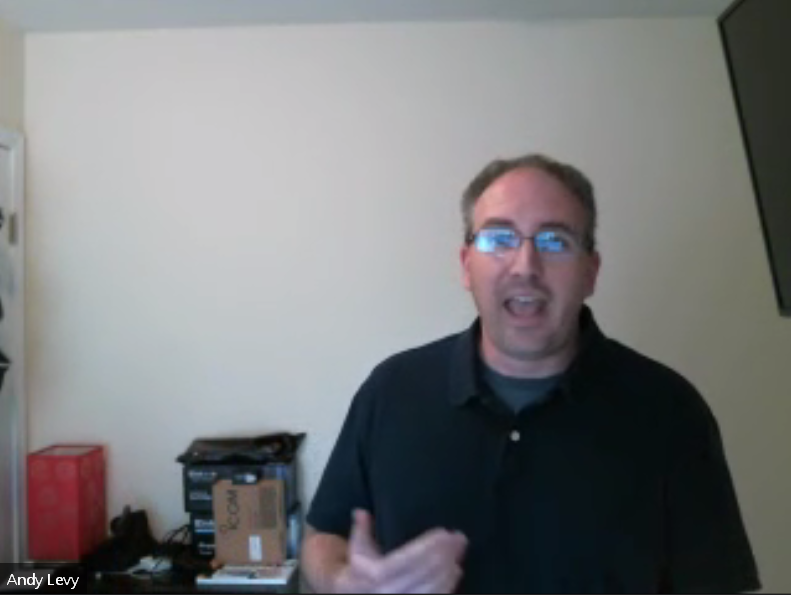 What you see when the presenter’s PC BSoDs

I guess I did OK with the cutover. I didn’t keep track of how long it took, but Andy was paying attention.

But he handled it like a ROCKSTAR, and was operational on his backup in less than 60 seconds!

I was a bit rattled, and kind of lost track of my timing. I definitely rushed through a couple things trying to make up for what had happened. But the biggest hit I took was in losing my on-screen timer and presenter notes/next slide up display. Preparation and rehearsal pays off - I hit everything I wanted to hit anyway.

As I said above, Ed & his team did a great job putting the whole day together. It was convenient not having to travel to attend an event, even though I would be at this one anyway as long as my personal schedule lined up. Albany’s an easy drive and I’d only really have to take a half day off work. If more virtual events come up that I can attend, I really need to start submitting for them.

But something I heard from several people is that we’re all looking forward to next year when we can all be together again for this event. Seeing folks in 3D is nice. And we’re huggers in #sqlfamily. It was a bummer not having the speaker’s dinner Friday night and green room on Saturday to hang out and talk to folks - a sentiment I heard echoed this morning when I listened to SQL Data Partners Episode #202 with Matt Gordon (blog | twitter).