T-SQL Tuesday is a monthly blog party hosted by a different community blogger each month, and this month Kenneth Fisher (blog | twitter) asks us for non-SQL tips & tricks.

How about for this months TSQL Tuesday let’s do another month of tips and tricks. But just to be a bit different, nothing to do with SQL Server (in fact let’s say nothing related to a DBMS). No SSMS tricks, no T-SQL tips, something completely unrelated. For example did you know that, in Windows, if you grab a window and shake it then all of the other windows will be minimized? And then if you shake it again they all pop back up.

So give me a non SQL related tip or trick. OS (windows, mac), Cloud (Azure, AWS), etc. Something you think will be handy for the rest of us.

I’m going to go for a two-fer.

Up first - did you know that Windows 10 has a clipboard manager built in? Next time you need to paste something on your clipboard, hit the windows key, then V (Win+V). You’ll get a pop-up menu that shows your recent clipboard entries.

Do not adjust your television set. I really did use a screenshot of the text I was writing at that moment.

Select the item you want to paste, and it’ll drop in where your cursor is. Hit the ellipsis on an item and you’ll get some additional options. 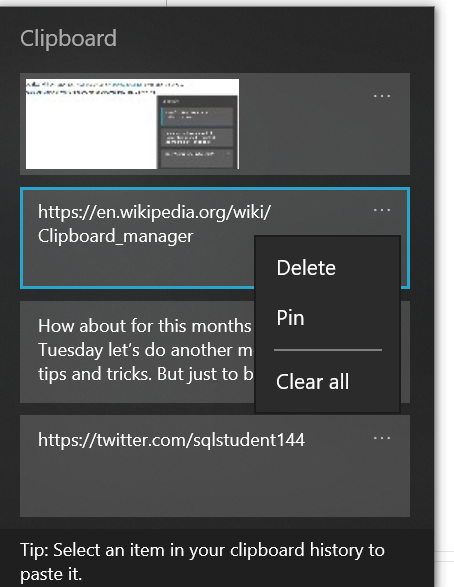 As you can see in this screenshot, it’s not limited to text items either - it’s the same rich clipboard (and since I used this post for the example, it’s a screenshot-ception) you’re already using!

Next, the Windows emoji keyboard. Hit Win+. (Windows key and the period/full stop/dot) and you’ll get a pop-up where you can search for and select emoji to insert where your cursor is. 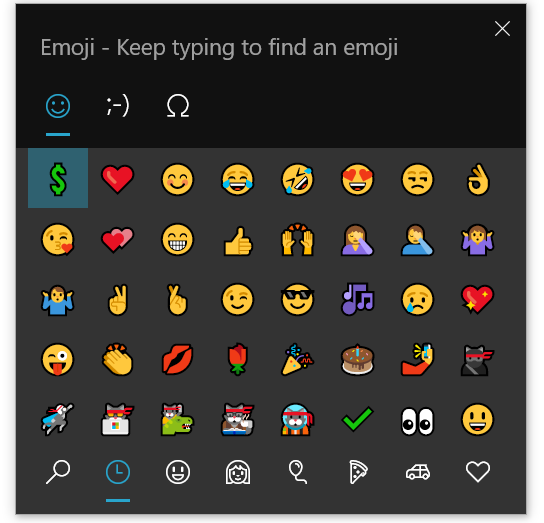 Can I just take a second to mention how bad Windows 10’s emojis look? I mean..really. They do not look good. Flat, poorly drawn, it’s just terrible.

But it’s not limited to emoji. You can also do Kaomoji which, as far as I can tell, is some really fancy emoticons like the table-flip. (╯°□°）╯︵ ┻━┻ 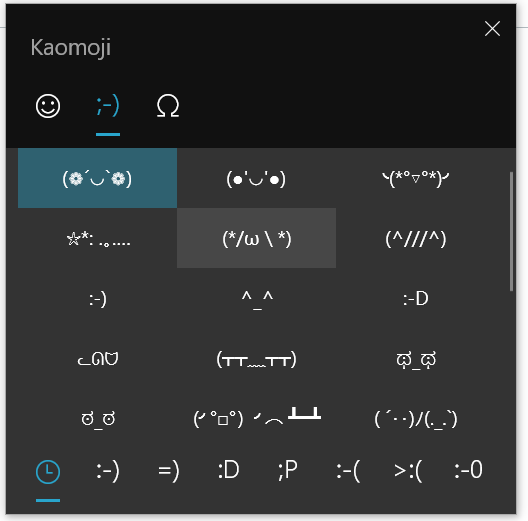 Was I Wrong Before?

When Microsoft first introduced the Windows key in 1994, I thought it was a gimmick. And maybe it was at the time. But today, it’s a gateway to a large amount of keyboard functionality (check out all the shortcuts on that Wikipedia entry) and it’s worth taking advantage of it.