I registered for Summit about a month before getting actively involved in the dbatools project, so when I saw the team was running a pre-con and I was going to meet them, I was pretty excited. It was amazing getting to meet and hang out with Chrissy, Rob, CK, Shane, Jess, John, Shawn, Aaron, Ben, Kiril, Shane, and Drew (sorry if I forgot anyone!), even if it was only for a moment.

But I’ll have another post about the people of Summit. This one’s about dbatools being talked about all over Summit and my experience with that as a member of the team. I’m certain there’s a heavy amount of confirmation bias here, but dbatools seems to have caught fire in the SQL Server community. And with good reason!

I was able to hand out about 300 of the dbatools fan ribbons I brought with me; half went to pre-con attendees, and the rest were handed out on the conference center floor at random. Sitting at the PowerShell table at the BoF lunches, people would join us and say “hey, I’ve heard about this dbatools thing but haven’t had a chance to learn it yet.” People would see mine and ask for one as they’d heard about the project and even used it themselves.

Rob Sewell talked about it at the SentryOne booth. I heard on Twitter and around the conference center that dbatools was getting mentioned in a number of speakers’ sessions, even the ones that didn’t advertise it in their abstracts. There was a panel discussion about PowerShell in general, spearheaded by the key dbatools team members and of course dbatools was talked about there. But the star of that session was Ken Van Hyning, aka SQL Tools Guy (twitter), talking about the roots and evolution of many of the tools we use and where he sees them going. He also hold us how we can impact the direction of the current tools and make pitches for new ones. Key takeaways:

We even managed to get a group photo with the dbatools team members who were in the building!

After all the “I can’t believe this is happening!” moments through the week, the final session on Friday was the icing on the cake. I was in Carlos L Chacon’s session Measuring Performance Through Baselines and dbatools popped up on one of his slides. 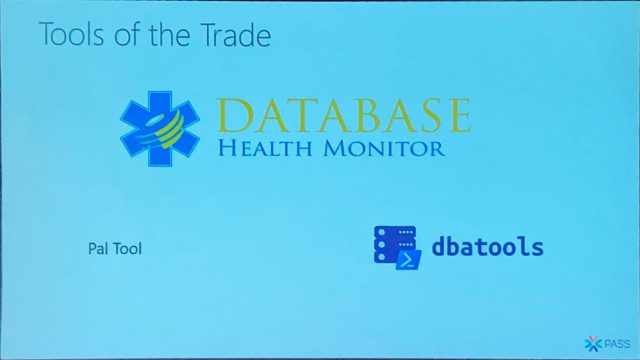 Later, Carlos demonstrated a couple of functions, Get-DbaAgentAlert and Get-DbaUptime. The latter sounded familiar, so I jumped on Github and checked the history to confirm. Yep, it’s one of the functions I’d done some (non-CBH) work on. Which means that code I wrote was executed in a PASS Summit presentation! Yes, it’s a small thing and I’m the only person who even knew it as it was happening, but it happened. Which is pretty awesome.