Settle in folks, this is a long, rambling post.

As this goes live, it’s been about three weeks since my abrupt switch from driving to the office every day to working from home full-time. This shift happened at the same time my kids had school cancelled, and our lives got flipped, turned upside down. So I’d like to take a minute, just sit right there, and I’ll tell you how I…am dealing with all this.

The time elapsed between the first draft and when it’s going live is considerable, and there are some thoughts from early in the situation mixed with current state.

Are You Doing OK?

I’m okay-ish. It’s been about three weeks now and little things are starting to derail me. The typical NY March/April weather isn’t helping. I’ve started introducing distractions into my workspace. The kids are getting bored and spending way too much time watching bad YouTube channels. Everyone is starting to get on everyone else’s nerves.

My podcast queue is getting unruly and I’m starting to be more selective about what to listen to. Normally I can keep on top of it thanks to my commute (70 minutes round trip) but without the commute, that time has gone away.

I think a big part of the difficulty is the lack of preparation. Had someone come to me in early February and said “in about 6 weeks, you’re going to go 100% remote and you won’t be able to go out for lunch with people or have other gatherings,” it might be a different story. I could take some time, set up a proper workspace, etc. But we all got thrown into this on very short notice and now we’re scrambling to catch up and get to a good place.

March weather being what it is in New York, I haven’t gotten outside a heck of a lot. Short walks mostly. As a result of that and snacking too much (the kitchen is only a few steps away), I’ve gained a couple pounds. Hurting myself cleaning the basement sure didn’t help either. But all that will pass.

Exercising social distancing and isolation means only seeing the same few people for days on end. SQLFamily has really helped on this front.

Mike Walsh (blog | twitter) of Straight Path Solutions has set up a weekly Zoom call/virtual happy hour on Fridays, 3:30-5:00 Eastern. Nothing formal, just a chance for folks to hang out, see each other through webcams, and talk about whatever. I don’t have numbers for it but for the two sessions I’ve been to, there had to be at least 30 people on the line and talking. I’ll echo Jeff Iannuci’s thoughts here:

So grateful @mike_walsh has been doing this. It's great to be introduced to so many #sqlfamily I'd never actually met in person, and see and hear some familiar friends as well! https://t.co/FJkZYMh5wh

I look forward to these gatherings. It’s a great way to close out the week.

Along those same lines, I held my first virtual user group meeting. I called it “Virtual Lunch” and like Mike’s call, we just used it as a chance for folks to get together and talk. Turnout was lower than I’d hoped, but we’ll keep at it.

I also had the opportunity to give a presentation to a new audience, SQL Professionals of Chattanooga. This was arranged a few months ago and was always planned to be a virtual meeting, but as above, it was refreshing getting to talk to different folks.

My department had been preparing for the possibility of increased remote work for a couple weeks already, but as the middle of the month approached, we cranked the effort up to 11. The evening of March 16th, I was told that I was to start working from home on the 17th until further notice. I knew this was coming, but not quite so soon - I wasn’t prepared!

So early Tuesday morning, I zipped to the office to loot my cubicle pick up the rest of my equipment. Got home and set things up in the back bedroom/office, relocating my spouse who works from home already to the dining room. The room has a smallish corner desk, just barely enough to fit the setup. 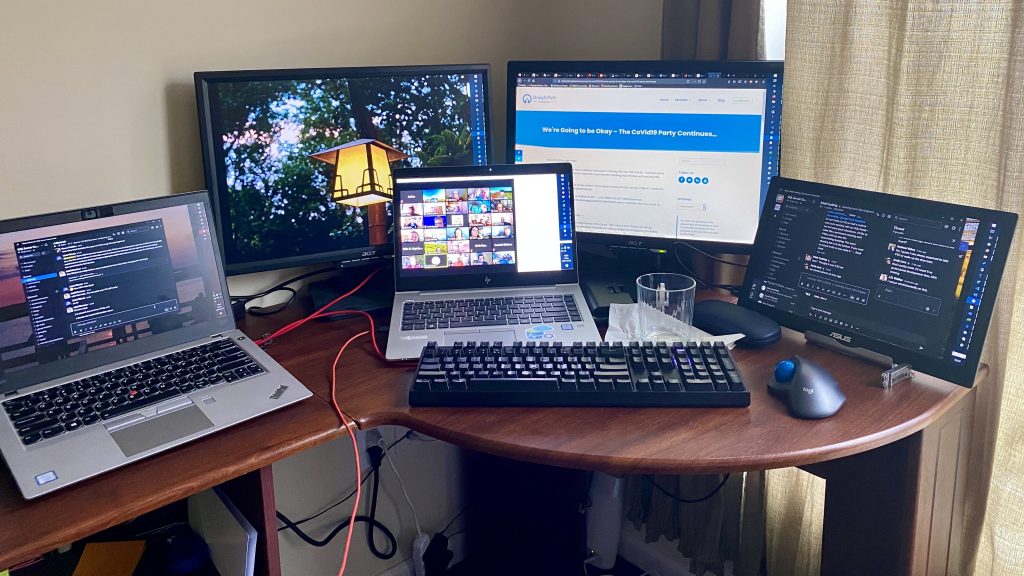 This mostly worked. Thanks to Microsoft Teams, email, remote desktop, etc. I was quite productive. In those first few days I had more conversations than normal with some groups of folks, and more productive conversations to boot!

Week two, things settled into being more routine. Working more asynchronously is going really well. “Drive-bys” don’t happen anymore; it’s much easier to postpone answering questions or getting into conversations when they aren’t initiated face to face. Which isn’t to say that those conversations aren’t being had - quite the opposite, in fact. But for me, it works much better if I can say “let’s talk about that this afternoon, what time is good?” Having office hours helps manage the day a lot more easily.

After about 6 days of working at Desk Version 1, I found myself needing to move to a standing arrangement. Sitting all day, even with hourly breaks, was wreaking havoc on my back. Fortunately, a few years ago I’d built a 4x4 table for a train set which turned out to be the perfect height for a standing desk! I moved it up from the office and embarked on Desk Version 2. 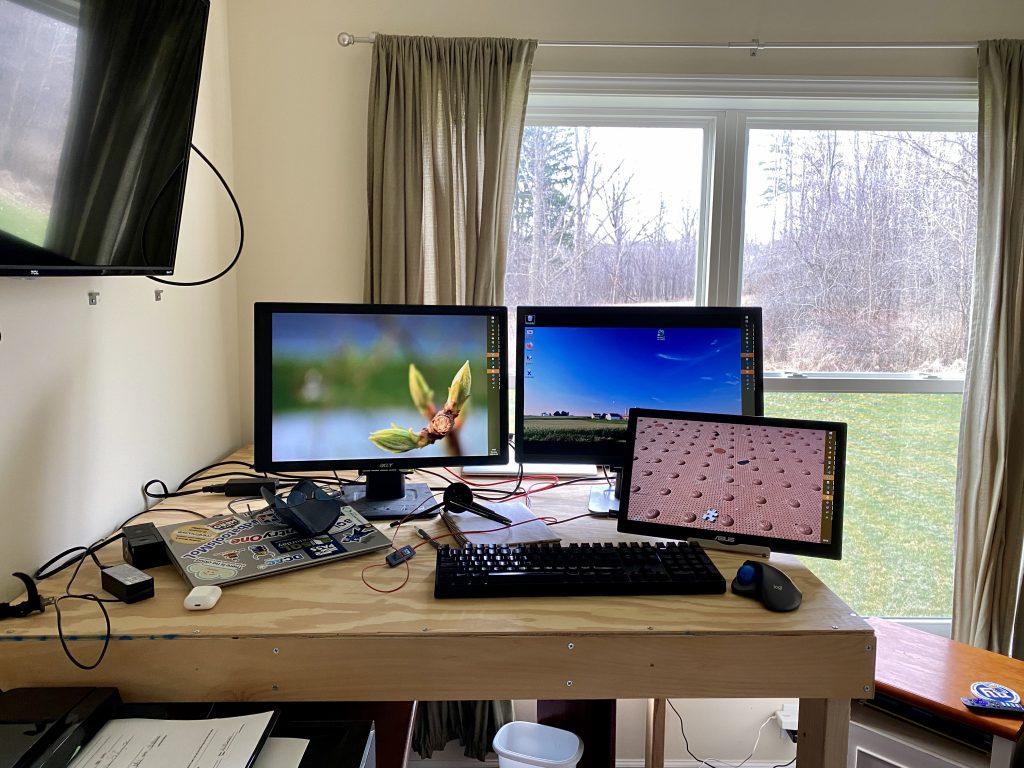 This thing dominates the room and is really too large for the purpose. It will be replaced with a more appropriately sized sit/stand desk, hopefully soon.

I’ve really only hit three obstacles in my day to day work:

I’m already shopping for my next desk, to the point where I’ve already started ordering accessories for it. The current one was intended to be temporary anyway.

At the same time my office switched to WfH, schools all over the area closed down. Teachers had very little time to get online lesson plans put together and two and a half weeks in, they’re getting close to having online lessons soon. Neither of my kids are getting more than an hour of school work daily thus far, so I’ve set them up on Khan Academy and want to see them doing an hour or so each day.

We spent one day of our first “official” weekend of isolation cleaning and organizing the basement. We’ve just been throwing stuff down there for years. Even if I wanted to set up a desk in the basement, there was no good place to put it. In the process, I managed to throw my back out because I tried to move a sofa the dumbest way possible.

Weekend two, Saturday was a washout but Sunday afternoon was beautiful so I took my daughter out for some geocaching to chase good views of the lake. Had a nice drive, a nice chat, and got some fresh air and sun. 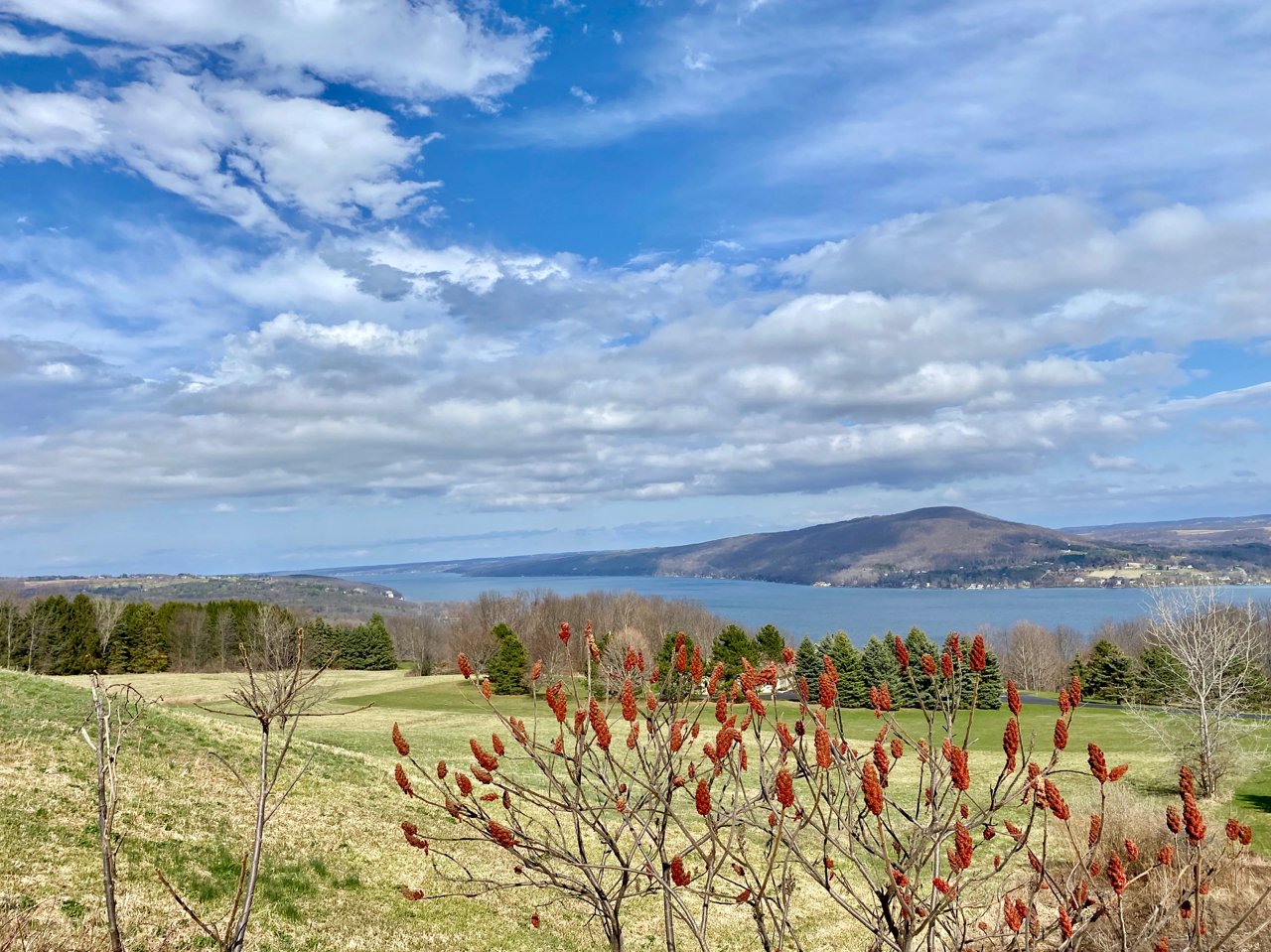 Our kids’ activities are cancelled or significantly changed. Boy Scouts is on hold and dance classes are being done over Zoom. The latter was another reason to clean out the basement, to make enough space for dance exercises.

I’m not as OK as I was at the beginning. But I’ll get better. There will be ups and downs. Things will settle out. I’m going to resume putting on a collared shirt for work (I’d dropped to T-shirts when we went to full-time remote), I’ll get that new desk ordered and I’ll set everything up to be more comfortable/usable, and keep pressing forward.

We’ll get through this together. But from a safe distance.