For years I’ve looked at various queries online in sample code, diagnostic queries using DMVs, and the like and seen CROSS APPLY in the FROM clauses. But I’ve never really managed to comprehend what it was for or how it worked because I never saw a case where it was directly applied to something I was doing.

Finally, this week I had a breakthrough. I was working on updating a bunch of data but it was breaking on a small subset of that data. In this case, I was attempting to JOIN two tables on fields that should have been INTs, but in a very small number of cases one side was using a comma-delimited string. The user told me that someone else had done these updates in the past and didn’t encounter the problem I was having (so I knew that it was something i was doing “wrong”), but given that it was only a handful of broken updates she was OK with manually doing the updates (we were scripting it because we were updating potentially tens of thousands of records).

I am not OK with manually fixing this in the future. I wanted to know how the other DBA had done it before. I dug into some history and found CROSS APPLY. My nemesis. I was determined to figure out how to use it this time.

Let’s set up three simple tables to keep track of airports and what state each airport is in. But our developer doesn’t totally get database design and in his state-to-airport mapping table, he allows for a comma-separated list of airports associated with each state.

This makes getting a list of airports and their associated state names tricky at best if we don’t know about CROSS APPLY. With CROSS APPLY, it’s pretty straightforward.

string_split() is a Table Valued Function which we finally got in SQL Server 2016 after far too many years of having to write (or, let’s face it, copy from someone’s blog post) inefficient string splitting functions. Important note: even if your database engine is SQL Server 2016, the database you’re operating in must be at CompatibilityLevel 130

If we take CROSS APPLY and break it down into its parts, it finally starts to make sense.

So now I have N rows for each StateId in #StateAirports, where N is the number of values in the comma-separated field. And JOINed to each row is one of the rows from the output of string_split(). 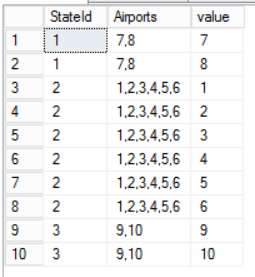 From there, the query is pretty normal otherwise, JOINing to the other two tables to translate the state & airport ID numbers to their text values. 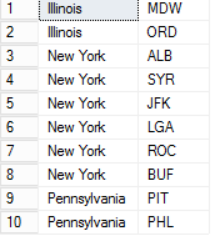 Hopefully this helps others get a handle on CROSS APPLY and find useful places for it. This had been a head-scratched for me for years, but only because I didn’t have an example that clearly broke down how to use it and what was going on. In hindsight, I probably could have used it in some analysis I did at a previous job but instead resorted to parsing & processing comma-separated data in a PowerShell script.